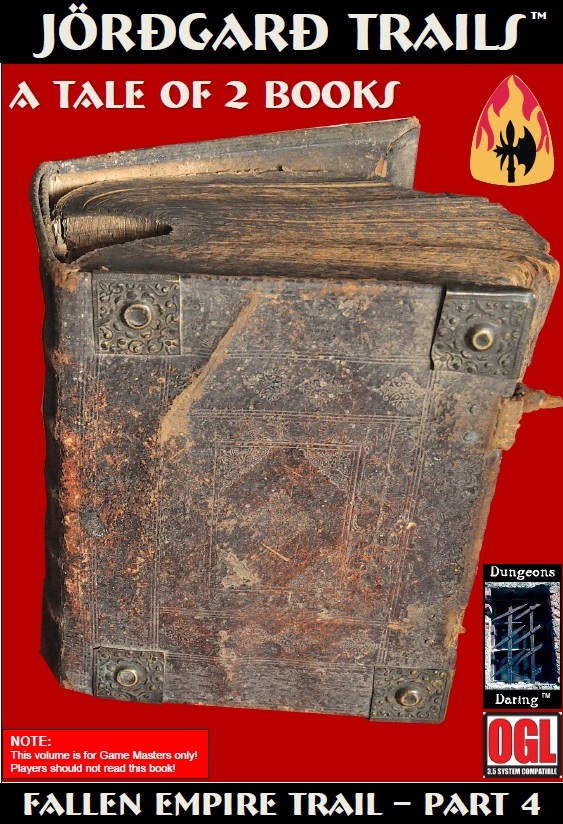 It's about 18 months later than planned due to Corona-Covid19 problems within our project group, but we've at long last released Chapter 4 of our Jörðgarð Fallen Empire Trail adventure, "A Tale of 2 Books." It's a free open source, open gaming product.

What does this have to do with cartography? Simply this: The new release contains 96 new maps and in JPG format also numerous zoom views from these maps. One can extract the JPGs from the Open Source Reference Document. Users of Fractal Mapper 8 can download the maps in their original FMP format and then modify them as desired, either for tailor-made customizing of the adventure or to adapt them for use in other adventures.

A Tale of 2 Books
Chapter 4: The Fallen Empire Trail (Freeware)
An epic module in an epic adventure for the Dungeons Daring™
and OGL 3.5 fantasy roleplaying games.

"Trailsend" – the 5th part of this adventure and still a work in progress, is the grand finale, but "A Tale of 2 Books" is its roleplaying climax. The fallen high draug (undead), Martröð, left behind the true bodies of his powerful dark draugs in his polar ice castle, where the great druids intend to go to destroy them. To enter the castle, however, they need its lost ice key. The high draug also left behind his "Black Book of Martröð," which contains the secrets of the world's most powerful dark magic. One of his surviving red draugs has the book and is learning from it.

The PCs' mission? Explore as many as six castle ruins with dungeons – two of them middle-sized "killer dungeons" – and travel through a corrupt and dangerous human land, an orc-infested mountain valley and cross a river filled with swamp draugs to enter a land ruled by vampires while searching for the key and book. It's all in an illustrated, bookmarked PDF file of 832 pages with a 196-page PDF of Player Handouts.